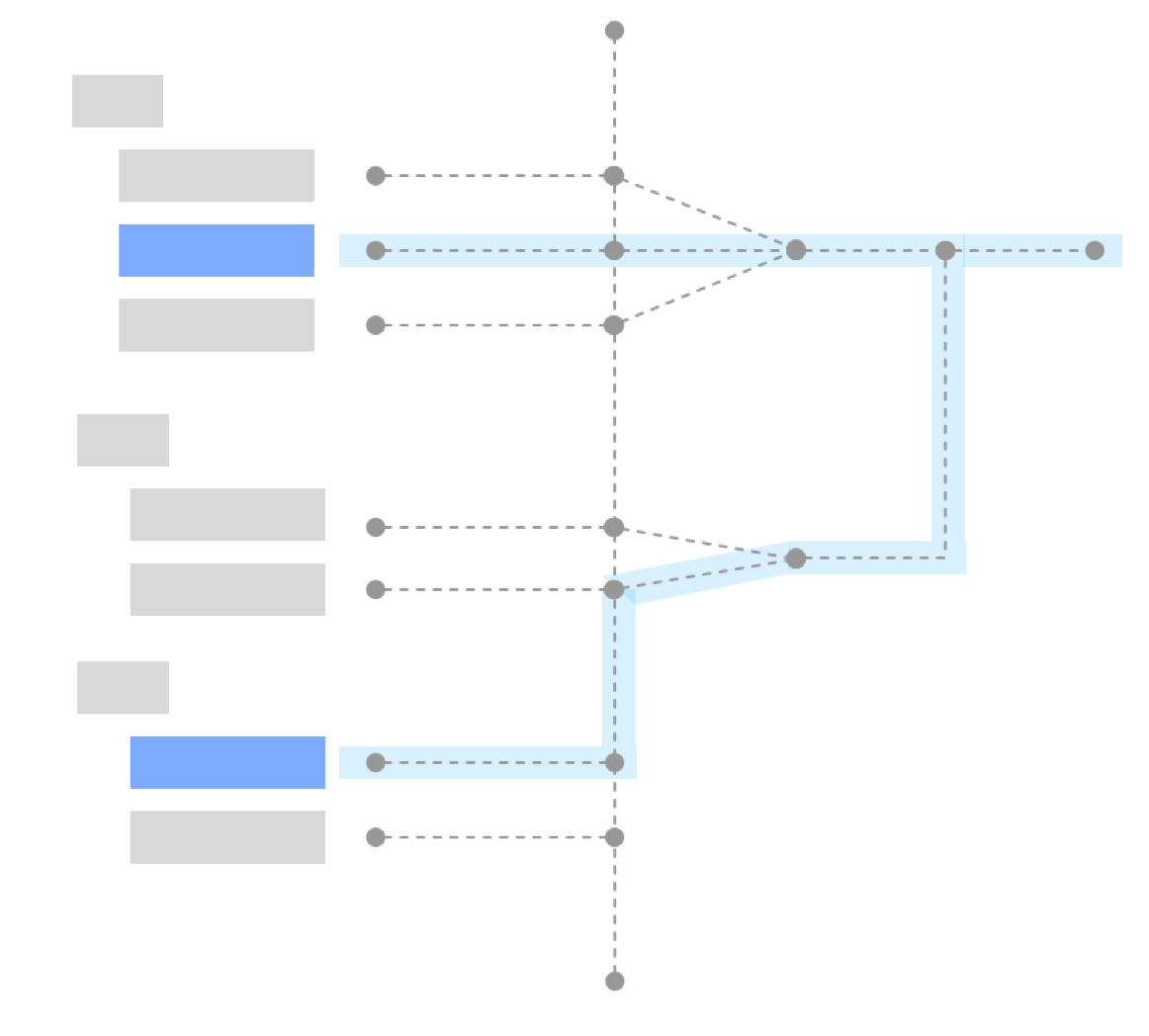 At the center of our technology is the YourBase dependency graph, which records and stores information that is used to accelerate subsequent test runs. It ensures a correct build with a minimal number of test runs required.

This approaches makes developers' lives much easier, letting them avoid running long test suites and allowing them to select only 1% or 10% of tests to run at times.

The YourBase dependency graph is at the core of automatically handling this kind of acceleration safely.

How test runs are safely skipped

and a test file test.py that defines tests using some of the methods from the file methods.py.

Upon executing the test.py test file, we can observe that the test test_capital_case relies on a single method from the file methods.py, capital_case, but not on the method fib. If we were to make a code change to fib, and re-ran the test file again, we should have the same exact outcome as when we ran the test file the first time.

During a test run, YourBase traces the execution path of each test. During a test’s execution, it learns about the various files and methods that get invoked, and then stores information about them as dependencies of that test in what is known as a dependency graph (explained more later). YourBase then uses this graph in order to skip tests whose dependencies were not changed in the code changes, delivering the same test results as running the entire test suite as a result.

YourBase uses this dependency principle over and over again to determine which tests to safely skip per build. The “skippability” of a test is based on whether or not its outcome would stay the same pre-code change, as it would post-code change. In addition, we only skip tests that formerly passed.

If a code change affects methods or files that a given test does not depend upon, then running our test suite on that code change should not change the outcome of that test. And so, that test — if it previously passed — can be safely skipped.

Despite our simple example of skipping test test_capital_case when only fib is changed, most tests and test suites are not so trivial. YourBase Test Selection is robust enough to handle complex dependency analyses for you, automatically determining how code changes affect test executions in a variety of simple to complex dependency cases. We regularly ensure the correctness of our test selection technology across huge production codebase test suites for our customers.

Using the previous example, the dependency graph for the test file would look something like this: 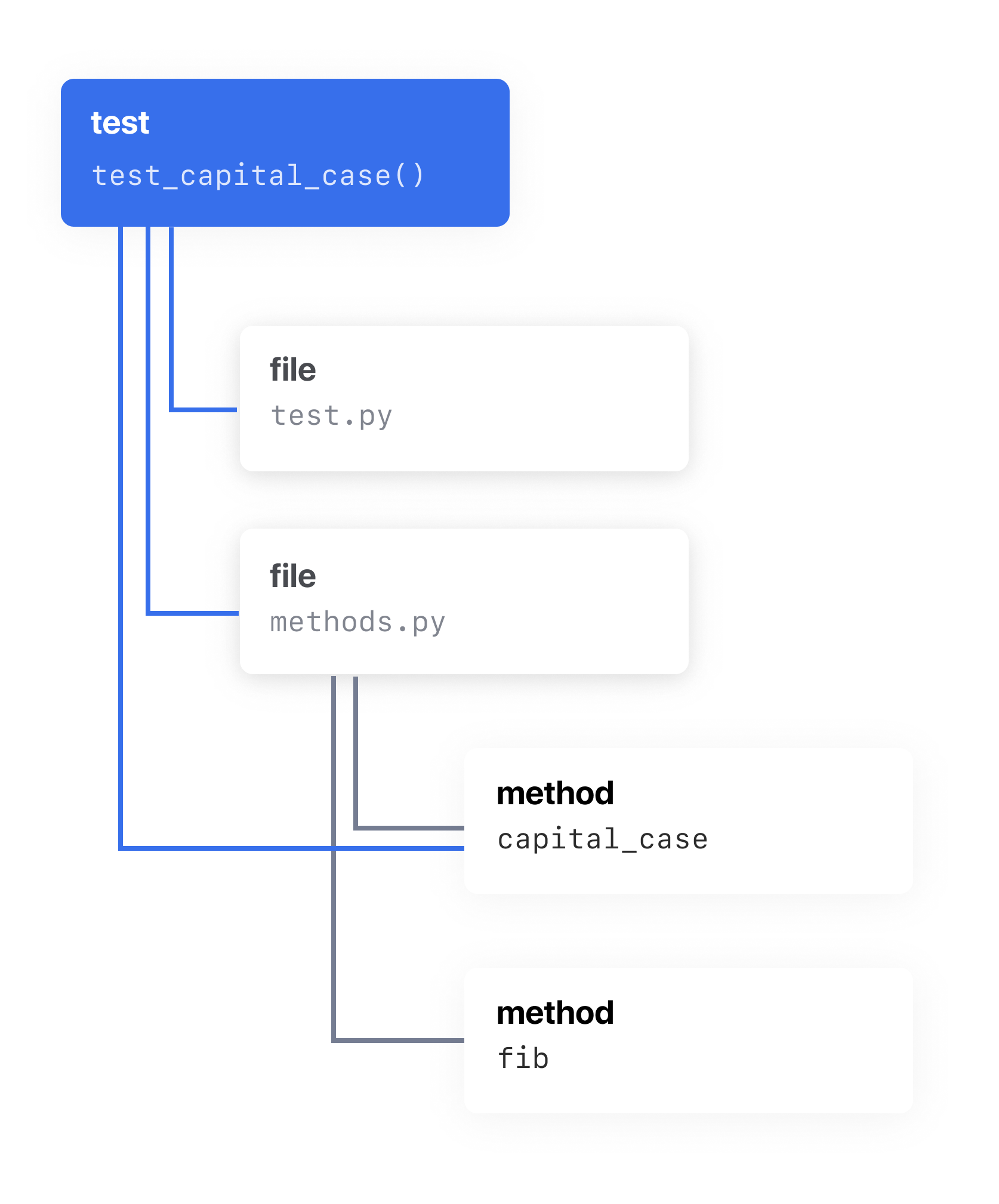 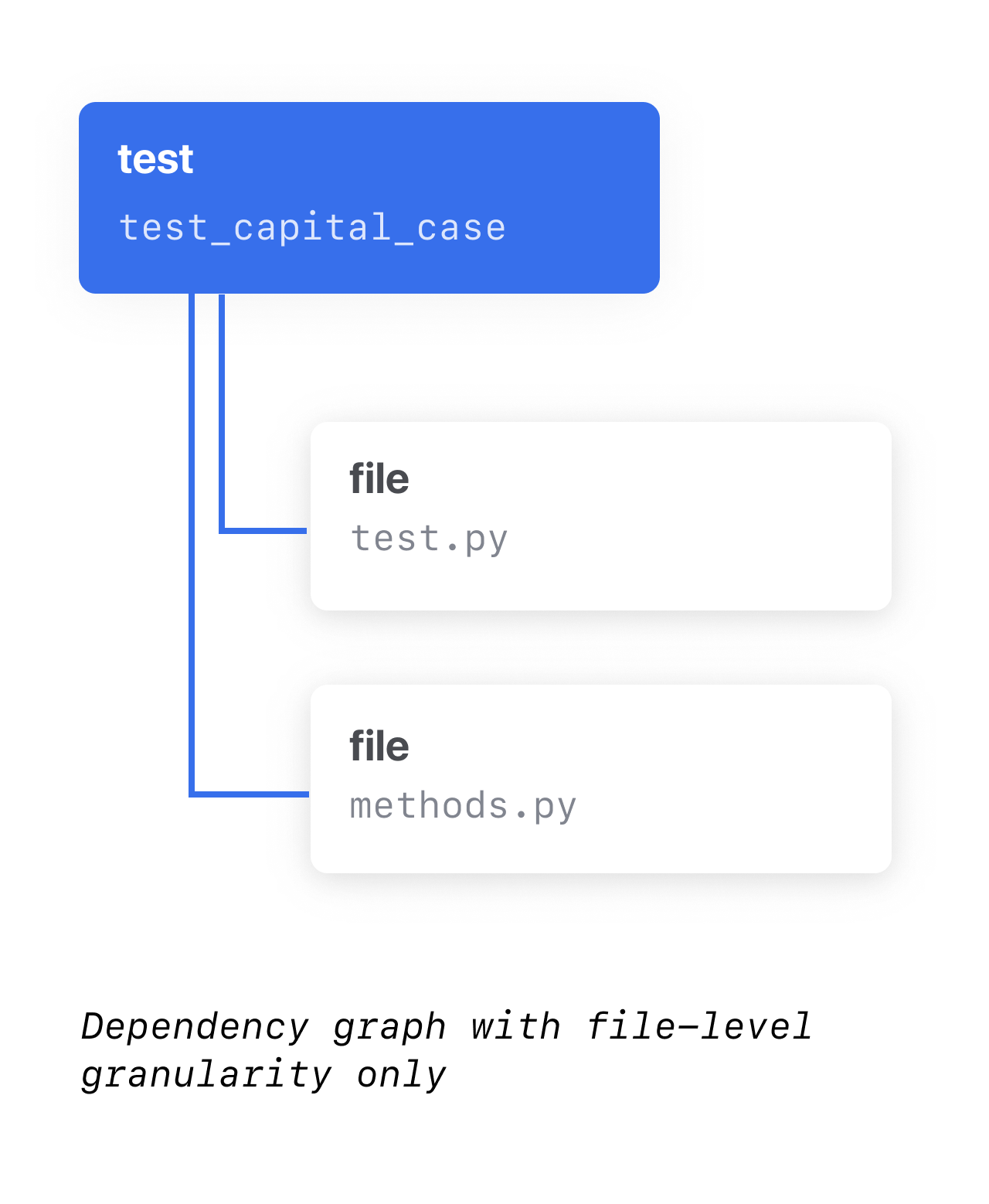 For Python (both versions 2 and 3), YourBase supports both file-level and method-level analysis to achieve effective accelerated outcomes.

The YourBase dependency graph gracefully scales to test suites with ten of thousands of tests or more, enabling test selection on very large scale projects. With YourBase, you can avoid managing the memory of which tests use which parts of your codebase yourself.

The YourBase dependency graph is used during subsequent test runs to determine if a test can be safely skipped or not. The YourBase engine needs two things to do test selection:

Using metadata stored alongside the graph, the engine is able to determine the set of changes to the source tree that have occurred between the point in time of the graph and the current state of the source tree.

The flow of the YourBase engine is outlined as follows. 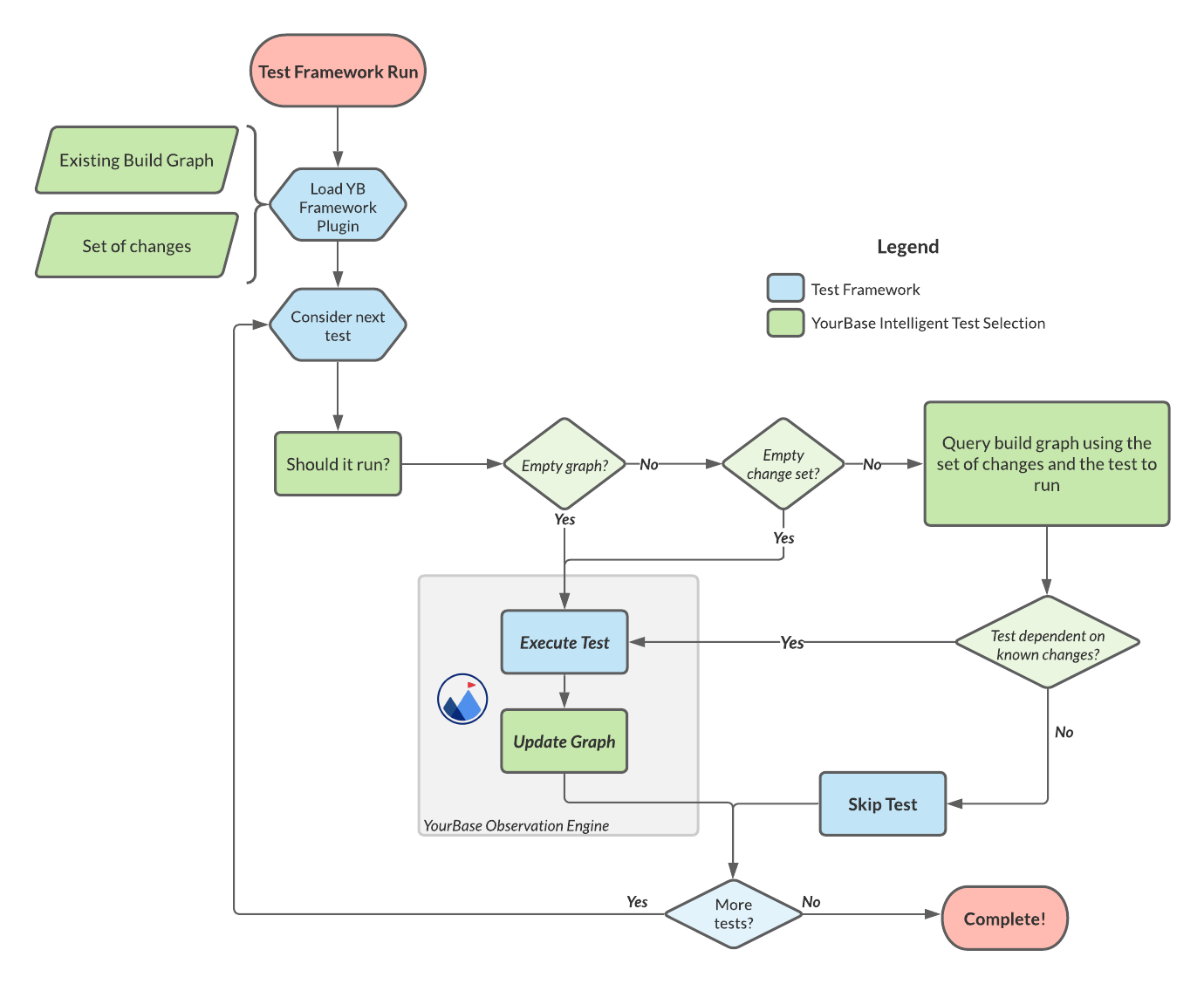 Back to our simple example — consider making a change in the fib method after an initial graph was built.

On a subsequent test run, our input to the engine would be the changes to fib along with the newly generated graph. Using this information and following the flow above, when asked if we should execute test_capital_case, the engine would determine that we had a non-empty graph and a non-empty set of changes.

When it proceeds to query the graph, it would be determined that test_capital_case does not depend on the set of changes (to the fib method) and can therefore be safely bypassed.

The rich dependency model and granularity of our build graph enable the YourBase engine to apply this same process to very large test suites with tens of thousands of tests in them.

In many cases, the YourBase engine reduces the majority of build and test times from an hour or more, down to a few minutes.

To demonstrate, let’s analyze the results of a large Python Django project for a major logistics company. It has over 10,000 tests. In a traditional CI system, the tests take over an hour to run completely.

We performed 6 experiments of 4-10 distinct commits each to test for the % of tests skipped and the average runtime difference before and after YourBase Test Selection.

Each experiment starts with an initial unaccelerated build, or cold build, that resets acceleration by running every test in order to build a new dependency graph. We then committed various code changes to the codebase to trigger accelerated builds, each build running on the same set of 10,000+ tests.

The chart below demonstrates the results of the % tests skipped for all 6 experiments. Each experiment begins with a cold build (skipping 0% tests), and then accelerates each subsequent build over 4-10 commits. 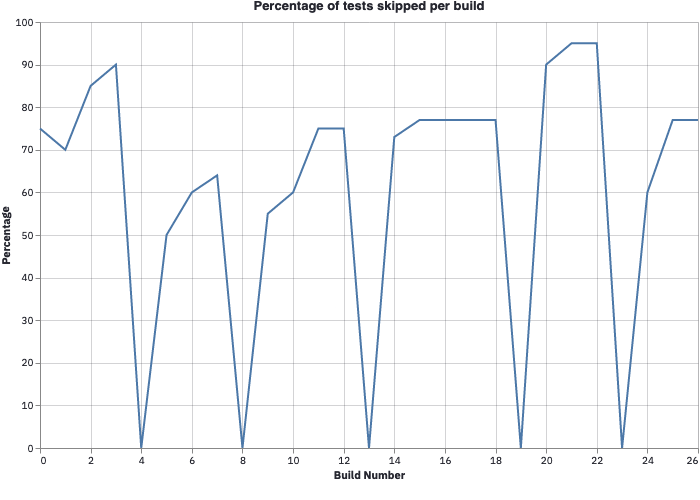 On average, YourBase skipped 50-90% of the tests during subsequent builds, varying per commit due to the size and scope of their code changes. 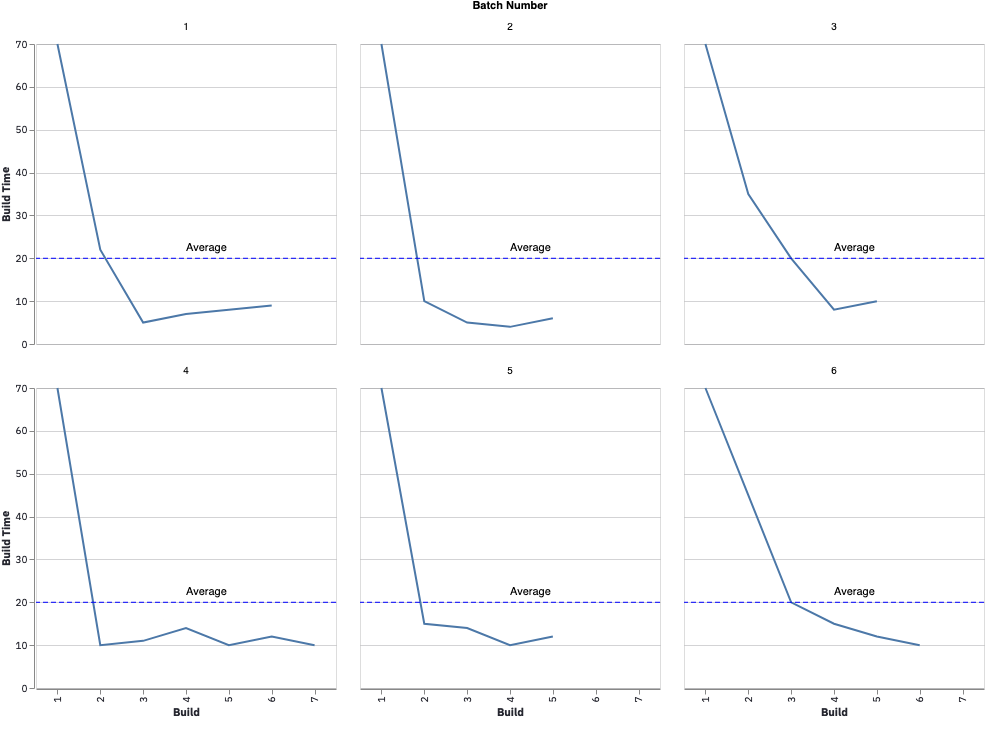 75% of builds completed in under 9 minutes 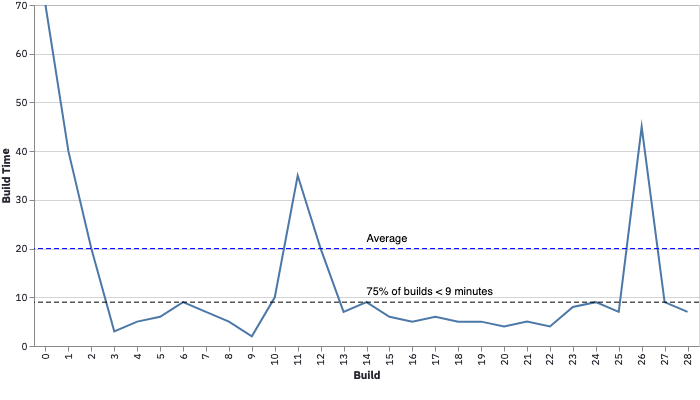 While the average is still 20 minutes because of some larger changes that were introduced, the graph above shows that 75% of all builds completed in under 9 minutes.

This experiment serves to show how YourBase’s test selection technology delivers real, significant results that can help teams cut down on unnecessary infrastructure costs and time spent on a daily basis.

In normal use, developer teams create the initial cold build only once, allowing each subsequent build, no matter how many, to be accelerated.

Our small experiment performed a cold build at the beginning of each batch of 6-10 commits, so our results are admittedly underestimating the true impact that YourBase Test Selection could have on developer productivity in normal use.

Our team has worked on developing build and test acceleration technology for the past 4 years, and our work has been featured in a December 2020 publication to the IEEE on Acceleration in Continuous Integration. We are committed to creating a future where large code changes move fast, engineering toil can be eliminated, and the world’s technological progress can move faster at 10x speed.